Paul A. Lunn has penned an excellent article on model railway design in this month’s Model Rail (November 2013) entitled “Breaking the Mould”. He is challenging the basic exhibition concept of an oval layout that is scenic on the front boards and fiddle yard at the back with the operators in the middle. Paul’s idea is to have a fully scenic oval where all sides of the layout can be viewed and trains are moving all the time. There are still hidden tracks; the design he gives as an example has an inner oval of track that runs behind the back scene and links to the visible section in a number of places. I love the concept. Especially since I’m very bored with traditional layout design and I spend half my viewing at exhibitions looking to see what’s in the fiddle yard while nothing moves on the front of the layout.

In the 1970s I remember Model Railways magazine carrying an article “Full Frontal” similarly challenging traditional design, but using a different approach to Paul A. Lunn.  I was as intrigued by that article as I am by Paul ‘s nearly 40 years later. The original full frontal concept has always lead me to hate hiding trains in fiddle yards, but Paul Lunn now has me thinking again. Breaking the mould has me pondering over the design of my own Rede Valley Line. In Model rail, Paul also penned a second track plan adapting his exhibition to a home layout, putting the hidden tracks around the outside of the railway room behind the back scene. I started thinking of something similar for Rede Valley a few months ago, but didn’t get very far, so the pen and paper are coming out again.

Paul is quite right to challenge the status quo. Far too many layouts are simple round and round ovals. Why have only two entry/exit points to the storage area? Paul’s designs show many more. a junction from the main visible line can disappear into the back scene and join the hidden oval. Locomotive sheds and goods buildings built against the back scene can disguise links to the off  scene storage. Loaded wagons enter the building empty ones can exit. Locomotives can be taken to and from trains waiting in hidden loops using the loco shed for storage. All in all more realistic and varied operation should be possible simply by thinking outside the box.

I’ve got a few things I’m not happy about with the current arrangement and I want to see if I can overcome these. Chief among these stems from the shape of the roof space. The Rede Valley Line is a loft layout and currently the main scenic boards are attached to the sloping sides of the roof apex, meaning the space between roof  and layout decreases from around 2 feet at the front of the layout to nothing at the back. This means there is no scope for a vertical backscene. Using Paul Lunn’s approach would bring the rear edge of the scenic part of the layout forward and away from the intersection of roof and baseboard to a point where there is a gap tall enough to include a backscene. 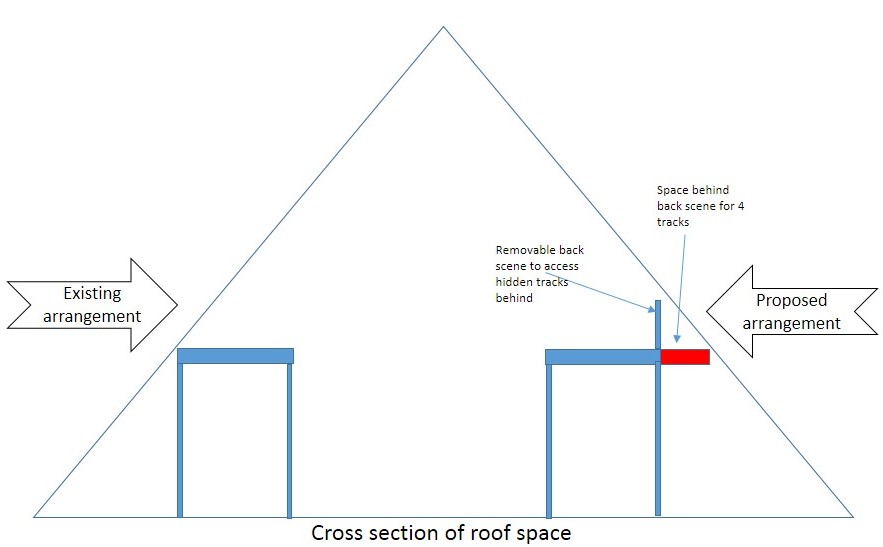 The change of approach will be radical, meaning scrapping most of the layout so far built, however a good amount needs to be changed anyway:

This means that most of the track needs to be lifted and relayed, so there is an opportunity for a rethink. This can address some other things I’m dissatisfied with.

Ive always been determined to follow a full frontal approach, with all areas of the layout scenically treated. The Paul Lunn hidden oval gives a great way of doing this without disguising a fiddle yard as a main station. I was never happy about storing freight trains in this area, it just wouldn’t look right, the revised approach will hold all inactive trains out of sight.

Design won’t be straightforward. I still want to be able to have full length trains, Paul’s designs in Model Rail had really short storage loops. The plans in Model Rail also showed circles of track that acted as reversing loops. the radius of the curves on these look impossibly tight, particularly for longer trains. The back scenes will need to be removable for access to hidden track for maintenance, so this will restrict the options for scenic treatment. The new construction will be a major undertaking but I don’t want to lose the ability to run trains, so a phased approach that always has something operational will be necessary.

The next step is for some initial conceptual drawings, and then once I’ve got something I’m starting to like ill draw it to scale in xtrackcad. I need to finish the 300 inch challenge layout before I even contemplate changes to the Rede Valley, and even then I’m only going to do something if I can come up with a really good design. The basic idea is illustrated below but there is still a long way to go. My initial thought is to incorporate my part complete viaduct scene into the reversing oval: 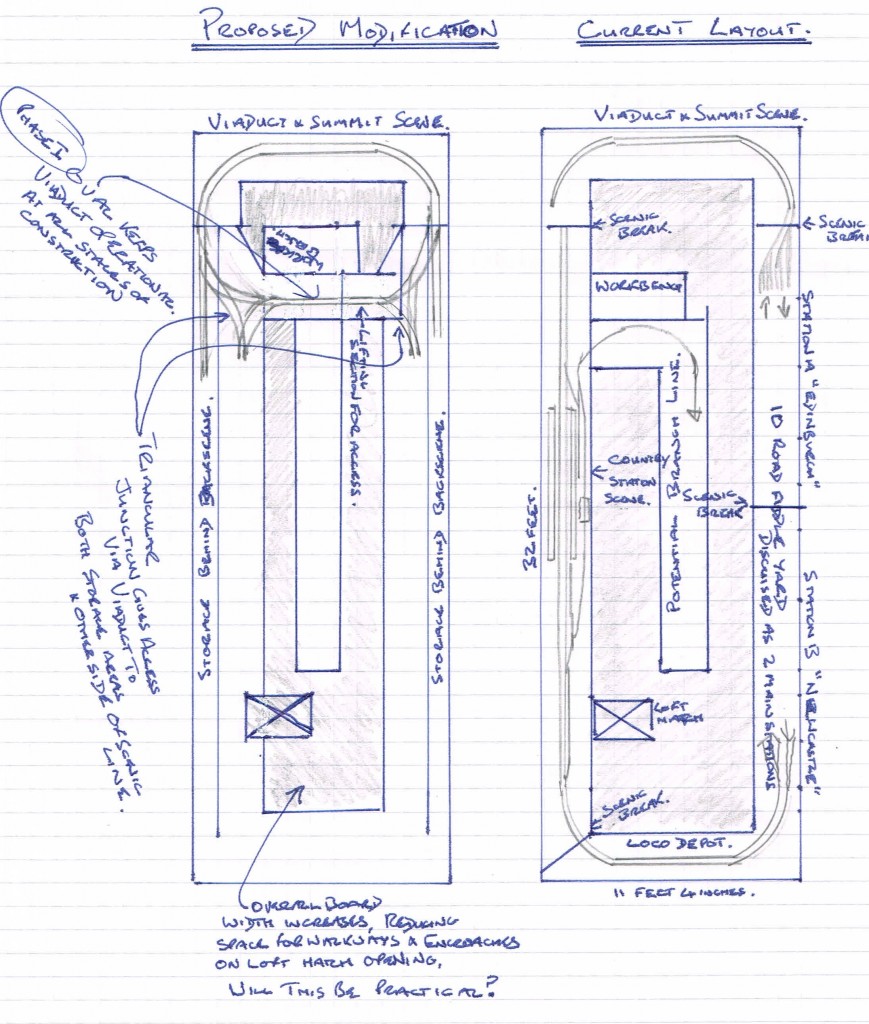 Paul Lunn has written some great books on Model Railway design, and these are some of my personal favourites. The final plan in “Making Tracks” is one that is influencing my thinking a great deal right now, and it was that one that first gave me the idea of tracks behind the backscene. My 300 inch challenge design is also heavily influenced by Paul’s “beginning micro layouts”, with the idea of an elevated signal box taken straight from his “Across the Diagonal” plan.